‘Member when horror films were scary? Or was it all a dream… 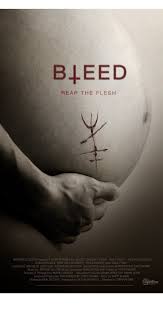 Bleed opens with one of the oddest scenes in recent memory. Who knew that a story about hunting could be so exciting? Maybe if it would have delivered without the deadpan voice and actually had some dialogue, the audience might have cared. The bizarre intro might be the highpoint of the film, and this is not a good thing.

The film follows Sarah and Matt on the move to a new home in the country in preparation for a new baby. Of course, there is something wrong with the house. Not the ghosts. Ghosts are at least interesting. No, Sarah and Matt must deal with something much more horrifying: idiot houseguests.

Horror films as a genre frequently neglect their characters, and this is something I have never understood. Instead of special effects wizardry or gore, emphasis on a character the audience gives a damn about will raise tension to a higher level. Sarah’s friends arrive first, and to my surprise, they seemed like real people. A genuine amicability resonated between the four of them. Leaving the cast at these four would have made the film tolerable. Not scary, mind you, but tolerable.

Sarah’s brother has to be one of the most obnoxious characters ever presented in a horror film. I can only imagine how awful filming this must have been. Did the director just say “Yeah just be as insufferable as possible.” I guess this makes his character more realistic (?) as we all have people we cannot stand who are in our lives. However, despite the realism, I just anxiously awaited his death. Any suspense or terror was immediately destroyed by the fact that I genuinely did not care about any of the people in danger.

Another ugly trope of contemporary horror rears its head here: the dismissive attitude toward people you supposedly care about. Dismissive attitudes are frustrating. Their function so rarely operates on a level that connects with the audience. More often, it just annoys me. My disbelief shatters when people who are in a relationship together suddenly don’t listen to each other.

The plot of the film reflects the vapid nature of the characters. It is obvious the writers were gunning for a historically connected ghost-drama in which the two siblings have a special power that can make things right. Sound dumb? That’s because it is. First, a film that barely breaks the 80-minute mark simply cannot achieve that level of depth (particularly when so much time is spent making us hate some of the characters).

For a personal example of how not scary this film is—usually watching a film causes one to be tense, right? My cat fell of the window ledge and scratched my arm while watching Bleed. I didn’t jump (which I usually would have). The film is so not scary it made an actual startling event not affect me. We have officially found an anti-horror film.

The haunted prison they choose to visit (for some stupid reason) isn’t exactly an inspiring location. I guess the set design is okay; nothing really to mock, nothing to celebrate. Though if this ghost is so dangerous, there is an awful lot of graffiti all over the walls. Maybe the ghost doesn’t mind the decorators, but just goes after the ghost hunters.

The mysterious side characters are laughably stupid. I checked to see if this was supposed to be a horror-comedy—nope. Weird to have a film that is all about prophecy and generations when it is all based on a chance encounter. That isn’t spooky—it is lazy writing. Characters separating when in danger due to impatience—stupid writing. A complete waste of a film. The grander narrative is predictable and offensive in its simplicity. Even the jump scares are half-baked. Butterflies don’t care for such things! 1/10