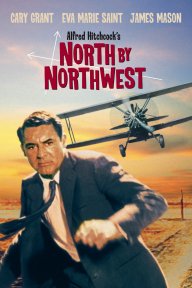 North by Northwest might be the funniest (or least tries to be the funniest) of Alfred Hitchcock’s films. Cary Grant plays a man who is mistakenly believed to be a federal spy by a group of criminals, and he must now run from both police and criminals to save his life.

The plotline of mistaken identity has been done a lot, but when this movie came out, there was still a freshness of the idea (I think). Perhaps it is the fact that I watch so many horror films that makes this trope seem so unwelcome. When we know the protagonist is right and everyone else doubts them, the films tend to drag for me. This movie comes in at a whopping 136 minutes, which is a bit much to take at some of the intervals.

A lot of people love this film. It boasts a 100% positive rating on Rotten Tomatoes, which to me seems quite inflated. Folks tend to put blinders on when approaching Hitchcock films, and that seems to make objectively reviewing the movie difficult. Sure, we have a fairly enjoyable yarn that proves to be at least mostly entertaining. The directing and acting are fine, but other than that—what does the film offer?

Grant’s portrayal of a savvy advertising man who can somehow handle the stress of being nearly murdered around every corner grates on me more than it entertains me. The forced humor aspects (primarily done through his sharp tongue) sometimes work, but by the end of the movie, I found myself more impatient than anything else. Granted, I know that I am not the best judge of comedies—as my complaints are usually that they are too long and humor wears too thin, both of which this film does.

The fact that Grant never really seems to believe he is in any danger makes it hard to really care about his situation. “I wonder how he will joke out of this situation” was how I approached every narrative turn.

The narrative stakes that are presented through a laughable light fail to give the film the bite with which Hitchcock’s films thrive. The assassination of the UN ambassador early in the movie made everyone in the audience laugh/groan. (I might have been the only one who groaned). It was just stupid. The two jackassy henchmen who pick up Cary at the beginning of the movie are likewise stupid. Why did they think Cary was the person? Who knows. Guess what? The movie will never let you know.

We crisscross all over the US in this film, and each location serves as little more than a setup for a cool shot. The famous “attack by crop duster” is an impressive technical feat, but it is also pretty dumb. The film tries to show the criminal enterprise as intelligent, ruthless, and beyond justice. Choosing to gun someone down in a crop duster instead of just driving up, talking to him, and shooting him is pretty ridiculous.

A counter to this is review is that perhaps I do not get the spirit of the film. This is true; I don’t. It seems like an overcooked idea where they threw everything they could think of at the wall and hoped it worked out in the end. Almost everyone involved in the film has done better work on other projects. Here we have Hitchcock at the height of his popularity pulling in some easy cash for a film that basically refuses to challenge the audience. Sure, film critics can debate the issues of gender, power, and law, but I doubt that most people are interested in these things.

Come for the crop duster, and stay for the sex jokes. I swear that must have been the original tagline of the movie. Don’t believe me? The film ends with a shot of a train entering a tunnel for a symbol of sexual penetration. Cool. 4/10