Time for some nostalgia. 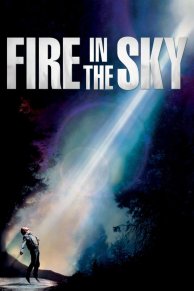 So, I saw this film when I was a wee lad, and it scared the crap out of me. I had to hide the fact that I had seen it from my parents, despite being absolutely horrified. When I saw this oldie was on Netflix, I knew I had to rewatch it. Oddly, I remember nothing from the film. It was almost like watching it for the first time.

Being from Arizona, it is nice to see my state represented in film. Arizona has always been a bit of a hot-bed for alien activity stories and what knot. Anyway, the film follows the supposed true story of a group of Arizona loggers who encounter a UFO, and the skeptical backlash they all face in the aftermath.

It was a bit weird rewatching this, and my primary question throughout was “I found this scary?” The film isn’t bad, but it isn’t particularly good, either. The good parts of the film are mainly in the seriousness through which the tale is told. It remains respectful, and doesn’t smack of cheap amusement like a lot of these “based on a true story” horror films that have since become a mainstay of the genre.

I identify this film as horror, but it is also science fiction. I see the two genres as incredibly linked, and I am certain that some will disagree with me on that, but this film weaves between the two genres fairly well.

The directing, acting, and set designs hold up surprisingly well. The structure of the narrative is a bit weird, as it is told in part through flashbacks, and in part through chronological telling. It is about 33% through the film that we actually see the abduction, and I am not certain if this was the best way to frame the film. Sure, we know the characters a bit more, but it also feels a little too long delayed.

The skepticism the men face immediately is done realistically (I think). The cops are presented as dicks, but the film does a convincing job of giving enough evidence that they are right to be.

The film is more about the extraordinary and how society automatically rejects such tales. I am not interested in discussing her whether UFOs are real or not, and the film seems to be more concerned with our assumed states of truth than anything else. While the narrative clearly argues these men are telling the truth, the more important and profound moments are in how it feels to be ostracized.

The cons of the film are that anymore it plays fairly predictably, and the tension doesn’t hold up as well. I also wonder how the idea of a lie detector being the gauge for truth would be taken from audiences today. It is an okay film telling an interesting story. Nothing too special, but UFO or science fiction fans will probably enjoy it. The music is probably the only part of the film that actively annoyed me—way too over the top.

I guess the summary of all this is that the movie is just kind of there. It works on some levels, and it was fun to rewatch it. Give it a shot. 5/10