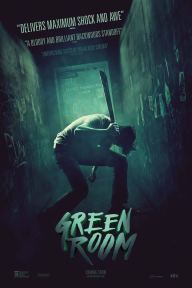 Green Room has been met with almost universal critical praise. The story focuses on a young punk band who, out of desperation, play a show at a Nazi hangout. After witnessing a murder, our young band is trapped in the Green Room as the Nazis, led by Patrick Stewart, work to silence them forever.

Honestly, the film didn’t grab me in the way that it seems to have done for so many people. The villains in the film, aside from Stewart, are paper thin. Nazis have become such a clichéd villain that anyone should seriously consider adding them to a narrative. Further, this film presents them as a monolithic group, there is little distinction between the majority of them, and they are presented as monsters. The band may as well should have been fighting zombies, because that is just about all the villains are in this film. Reducing Nazis to faceless monsters is a disservice to history. They were people, whatever their evil ideologies led them to do, they were still human. Presenting them as authentic people would make them more terrifying, and more accurate.

The film does try to add some nuance to some of the characters, but there isn’t ever enough. Stewart is the clear show-stealer, and the film would be much worse without his presence. Stewart even outshines the band, which made viewing the film odd as I only perked up when he was on screen. I cared little for our protagonists.

The band members, who are almost entirely interchangeable are presented as miscreants from the opening scene of the movie. I do not understand the logic of making them as unlikable as possible. In the first fifteen minutes, we see them steal, debate robbery, and assault someone for screwing up a booking for their band. Then, fifteen minutes later, they seem to want us to root for them. Sure, their situation sucks, but I didn’t feel any emotional investment in any of the characters.

Once the siege turns to violent survival the film plays out in predictable ways. Oddly, the character count drops to almost nothing about halfway through, which makes me wonder why we spent any time getting to know several characters. The violence is brutal, but it is little more than set dressing. The villains are villainous and the heroes are dumb. I have seen this type of movie before, and it is still boring. 4/10