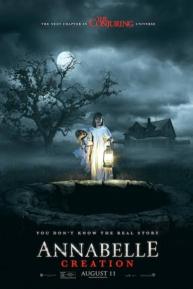 Annabelle: Creation is David F. Sandberg’s new horror vehicle that serves as the creation story for the haunted doll known from the Conjuring universe. The film follows a doll maker and his wife twelve years after their child dies in a tragic accident. Now, the couple tries to open themselves back up to the world by allowing the church to use their ranch home as a makeshift orphanage. Sadly, for everyone involved, once new children arrive at their new home the darkness that corrupted the doll reawakens to torment everyone present.

So, we have another haunted object movie, and this time it is a doll. Haunted dolls are nothing new in the horror genre. The Chucky series is probably the most well-known, but this staple has been around for some time. In a narrative sense, Annabelle: Creation doesn’t add anything new, but Sandberg’s style does elevate this film above a lot of other mainstream horror.

The strongest aspect of the narrative is the two lead child actors. Janice (Tabitha Bateman) and Linda (Lulu Wilson) carry the show. Janice is a victim of polio, and her disability leads her to be isolated and in some ways ostracized. Linda serves as her best friend, and the interactions between these two are genuine and powerful. I cared about these children, and their sad circumstances as orphans before the scares begin elevated this film in a powerful way for me. The evil of the house torments Janice, and as the movie goes from creepy slow-burn to all out horror-fest we see a great range from both of these young stars.

The problem with the movie is that the strength of the two leads does not translate to the other characters. There are simply too many characters in this one. Making the kids orphans does add a nice emotional set-up, but it also makes keeping track of all of them a little difficult. I think there were six total, but I am not entirely sure. Further, some of the kids just disappear for large chunks of the movie. When they reappear it is sort of a “oh yeah” moment for the audience.

The adult actors are odd throughout the story. I am going to focus specifically on the doll maker, Samuel (Anthony LaPaglia) who more or less sleepwalks through the entire film. I am not sure how he was directed to act, but his stiffness and inconsistencies drag down every scene he is in. What makes this even stranger is that Lapaglia is not known for being a stiff or bad actor, I have no idea what caused this. The household matriarch Eshter (Miranda Otto) is likewise imbalanced.

Compounding this issue is that Eshter and Samuel have their own story that is fed to the audience piecemeal, so we have two prequels in one. I am genuinely surprised that the film wasn’t broken into two separate stories. For once we see an area where the filmmakers chose to not opt for the highest profitability path. Sure, that is a plus for the film, I guess, but it is also really uneven.

The directing is good, and the camera works in a way that allows the scares to slowly come to fruition. I wish they would have opted for more sustained scares instead of relying so heavily on jump-scares. It was a fun film to see in the theaters as most of the audience reacted much more than I did.

For just about every Conjuring universe I have said they are great films for people who are new to the horror genre, and this film is no exception. However, there is no real difference between any of these films. We sort of have a new genre in this mainstream jump-scare horror. They aren’t bad movies, but they aren’t very memorable, either. For folks looking for a good adrenaline surge, this movie does it well. It serves as a good popcorn flick, but diehard horror fans (like myself) might be feeling a little left in the cold lately. 5.5/10