When life gives you lemons… 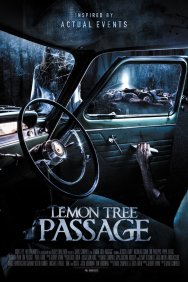 I recognize that my blog is probably more interesting to read when the movies are bad, so I decided to seek one out that I thought looked dumb. Death Passage is about the Lemon Tree Passage in Australia where if you drive fast enough you might see a ghost. This type of urban legend seems to be in the same ilk as huffing cat shit to see the future and eating rocks to pass urine tests (I made one of those up off the top of my head. I have heard the other before. Have fun guessing which is which).

We also have another film with split release dates. IMDB says 2014 and Amazon says 2017. There is no reason I can find other than it took that long to swim the film from Australia. Or, perhaps some valiant distributor tried to find every copy of this film and burn it to keep it from hurting other people. Sadly, this will never work though, bad horror films are one of those things that will never truly go away—like student loans or herpes.

Our film opens with a couple of interesting points. First, it seems that the ghost wants to make people kill themselves (and perhaps this film is some sort of meta-experiment to make the viewers do the same thing). Second, watching this movie will make you appreciate decent directing and cinematography. Almost every scene is set up weird. Characters’ heads are cut off in the shot, or only half of their bodies are present. The whole film has a weird haze over it (maybe someone did try to burn the original copy).

So, we follow a few dumb teens who are vacationing and they hear about the Lemon Passage—which sounds more like a strange internet video than a haunted area. The goal is to drive real fast and turn to the left and you might see a ghost. They do, but there is other stuff more sinister than that happening!

The plot of the film is kind of silly, but it perhaps could have at least been entertaining. I suppose it isn’t any dumber than the haunted house norm we see all of the time. What really crashes this film is the weird directing and simply awful characters. The two gals are okay in comparison to our bros.

You might be wondering if the acting is bad—I don’t know. If they were told to act like the most obnoxious dicks imaginable then I guess they did a fair job. I would rather squeeze lemons into my eyes than watch this movie again.

The plot tries to go into a more complex story, but the timeline is weird and we aren’t given enough to really care about what is happening. People looking for cheap jump scares are about the only audience possible for this, and there are a lot better options for that out there. Another option to get some enjoyment out of this film would be to watch it with some friends. If you are the type who will Mystery Science Theater a bad movie in a group, this one is ripe for the picking.

The weird part of this movie is that it does suck, but there is a certain level of care in the story. I don’t know how to fully explain this, but it is kind of like this is some sort of passion project that didn’t have a clear vision. Maybe this is a well known story in Australia (and it might work if you had more of a connection), and the movie attempts to a more powerful meaning in the final act, but it simply doesn’t work out. 3/10