There are good movies that nod to the past… 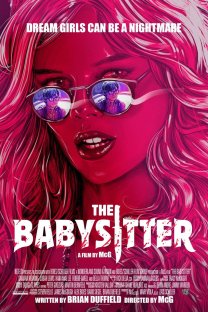 …and then there is this one.

In the same year that It proved nostalgia, humor, and horror could work together (I shouldn’t overlook Stranger Things, either) we have The Babysitter. We follow Cole, a young nerd who is constantly bullied, but we don’t really see why. His attractive babysitter, Bee, seems to genuinely like him, but of course there is more happening than would first seem.

I guess I am in the minority (the film sports a fairly high rating on RT) in that I don’t find bullying or father’s acting incredibly sexual in front of their daughters particularly humorous. I referenced nostalgia earlier in the review, but I am not 100% sure when this movie is meant to take place. It seems to want to draw on the cheesy fun of the 1980s, but it certainly looks like 2017—more or less. Maybe I am harping here, but I found myself distracted by references to Mad Men mixed with the 1980s aesthetic. Maybe they were going for a bizarre timelessness like It Follows, or maybe they didn’t know what they were doing.

The film feels gimmicky. It is like a bunch of folks decided to make a horror film without having watched many horror films. While in the best circumstances that idea could create a new look at the genre, this one just seems to go through the motions. We get a lot (and I mean a lot) of stupid scenes with Cole and Bee hanging out, but these scenes don’t add much to the overall plot.

Further, the treatment of Bee is little more than a sexual object. I’m not going to go into this much here, but let’s just say that this portion of the movie is certainly trapped in the past. This is further obnoxious as Bee’s sexuality is always forced through a male perspective.

The twist of the film is that Cole wants to watch his babysitter have sex—he is certain she is doing this once he goes to bed. He sneaks back out and finds her having a party that turns into a series of satanic cult murders.

Our cult members (for lack of a better term) are all annoying, sophomoric, and one dimensional. Sure, Bee is evil—blah blah blah. She needs Cole’s blood, too, which he gives without a fight. However, once he tries to leave the house he is restrained and we have a game of cat and mouse.

The writers seem to think cramming in as many supposedly edgy jokes about sex and race that we will somehow not notice how stupid it all is. We get a stupid kid dealing with stupid killers in a stupid movie. I see nothing redeemable here. 1/10.