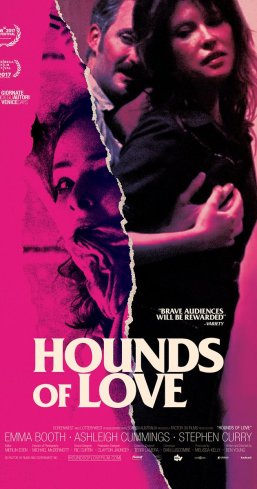 Hounds of Love is an Australian abduction thriller that works as an extended case study of two damaged people. We follow John (Stephen Curry) and Evie White (Emma Booth) who kidnap young women to rape and murder them. Their newest target Vicki (Ashleigh Cummings) must spend a hellish weekend with the couple and attempt to convince Evie to let her go.

So, we have another abduction movie—great, right? This one will actually surprise you in the depth of characters. The plot might be familiar (perhaps even too familiar for horror junkies), and the ending is a little too convenient, but the characters are where this movie soars.

We have a genuine look at severe psychosis in this film, and it is never treated as a gimmick. Curry does a fantastic job as John. We don’t get to learn a lot about John’s past, but we can tell that he is a coward when confronted by those whom he owes money. His vicious and sadistic treatment of women contrasts with his outward coward. These moments made him feel real to me. His abuse is not limited to the couple’s victims, but also to Evie. He brutalizes her often, and his cruelty is not only physical, but psychological as well. Evie is also violent, and her treatment towards Vicki seems to be due to years of gaslighting and manipulation.

I am not excusing Evie, far from it. However, we do have a hard look at violence here, and the idea that seemingly anyone could be capable of such extreme cruelty is stunning. I find these movies more interesting because psychopaths like Jason or Freddy simply cannot be. John White is more akin to Hannibal Lecter or Norman Bates than he is to any slasher character. Movies where it is just humans being monsters to each other rings a little more powerfully to me.

Vicki recognizes the instability within the couple’s relationship, and tries to use this to her advantage. Evie is too far under John’s spell for most of these attempts to work, but we can see how she slowly becomes aware of her situation.

The plot is relatively thin, but the film is never boring. Instead, we watch the film trek towards an ending where only two possibilities exist. Either Vicki will live or will become another victim buried in a shallow grave outside of Perth. The story is not concerned with the big picture narrative, but rather the small moments that allow us to truly get into the characters’ heads.

I think the film is somewhat mislabeled as extreme cinema. Granted, this is far darker than your run-of-the-mill horror story (I am hesitant to even call this horror); however, director Ben Young is a student of the less is more philosophy. We do not get graphic torture scenes, but we know they are occurring. A weeping Vicky staring at us as John closes the door is more than enough to let us know what is happening. The violence in this movie works to force a reaction, but there aren’t any gratuitous scenes—at least for me. Folks seem somewhat divided on this one. The unblinking camera, stripped down story-telling, and a director who allows the characters to exist as they actually are makes this a problematic film for some. Cruising the boards, I saw some labelling this as “how to” cinema. I have to disagree. The story is forcing us to look into the eyes of a monster and dares us to recognize that they are the eyes of just another person.

Where this film might lack the most is the narrative conclusion. It all wraps up just a little too tightly for me to feel satisfied. Further, it is the only point in the narrative where the cold realism is betrayed in favor of plot convenience. I don’t know if this is the type of film one will watch frequently, but the first time viewing packs a major punch. Fantastic acting from all involved sets this one apart from the numerous bad films of the same ilk. Certainly worth a watch. 8/10.