Strong performances drive the story of an underdog in 1973 that is somehow still relevant today. 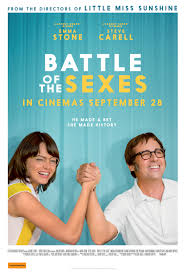 Battle of the Sexes tells the true story of Billie Jean King (Emma Stone) who protested unequal pay in professional tennis in the 1970s. King is a major star in the tennis world at this point, and her fight for equal pay eventually leads her to boycott the professional league and start her own. With many other stars behind her, the new league seems to be doing fairly well. I liked the take-no-shit attitude of King, and Stone plays the part quite well. I’m not going to lie, before this film I didn’t have much of an opinion on Stone, but she does well here.

On the other side of all this is Bobby Riggs (Steve Carell), an older tennis star who lost his position in the spotlight due to service in WWII (this is not mentioned in the film). Riggs is a hustler, and the thrill of being in the spotlight, as well as gambling, seems to be his driving factor. He sees the new women’s league as an opportunity to make a lot of money as he can play the chauvinist pig against the feminist. Riggs isn’t a completely despicable character—he clearly loves his wife and son, and it is hard to say how much of his showboating is all an act (King seems to think it is entirely an act).

What is interesting about this is that if we accept Riggs as just joking around, his many supporters are not. The gender divide here is quite gross, and we can all say that Riggs was just hustling, but we should also note he gave chauvinism a pretty big microphone. King at first has no interest in competing with Riggs, but after he defeats another women’s tennis champ, she feels that she has no choice.

The film looks good. The music, lighting, style, and so forth all work to create a dynamic setting that makes for an easy watch. I do think the running time is a bit bloated at over two hours, but it certainly doesn’t feel that long when watching. (I would have liked some more tennis scenes though).

Where the film doesn’t exactly work is that we have two halves of the story, and they are presented quite differently. King begins to fall for her hairdresser Marilyn (Andrea Riseborough), and these scenes are well done. Queer love is so often poorly portrayed that is was quite refreshing to see it taken seriously and without any need for gratuitousness. What bothered me about this half is that the film is forecasted as a comedy—and the second half delivers on that front with Riggs’ insane antics. The first half is an interesting romantic drama, and does set the stage, but it just seemed a little imbalanced for me. It was kind of like really wanting a pizza, but getting a burger instead—despite liking the film, something seemed a bit off.

The equal pay aspect of the film is done quite well, and it seems that this debate isn’t going in the right direction. The arguments against equal pay remain the same, and this film uncomfortably doesn’t feel like something in the past. Overall, this is a pretty good flick that is certainly worth watching once. 7.5/10