Watching this film did teach me a new term: an ashcan copy, which is when a company makes a film or product just to hold onto the rights. Interesting stuff. Oh? The film? Yeah, it sucks. 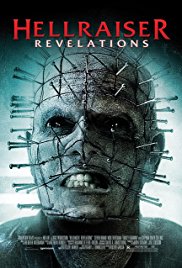 We are at the ninth film in the series! There is only one more to go after this one. I had never watched Revelations before, but I had heard plenty about it. The negative reviews surrounding this one are legendary—even in hell! Hahahahaha. (I think I have watched too many of these movies now).

I may as well come out and say it—this movie is a flaming dog turd that has been double baked. There is literally nothing that is working here. We also have a major problem. The new Pinhead:

(It would be kind of funny if I forget to put the picture right after the colon in a week when this is published).–I totally would have if not for this!

The new Pinhead doesn’t work—the voice, the presence, the makeup—it all sucks. A lot of the film’s criticisms have focused on the poor pinhead, but he is honestly the least of the problems. This film is so bad that I had to check several times to make sure I didn’t accidentally get a film-student bootleg. The directing is simply terrible. Jerky and inconsistent movements, no concept of style, the framing is uneven, and you never get a strong look at what is happening.
It should be noted that this was done on a shoestring budget, and is nothing more than a cheap and insulting way for the studio to maintain the rights. Well, fuck them. They clearly don’t deserve the rights for this franchise and have done nothing but ruin it. The best thing that could have happened would be for this film (and perhaps the franchise) to be buried once and for all.

You might notice I am not talking about the plot. Well, the plot sucks. It is a crappy carbon copy of the first Hellraiser and adds nothing. Instead of interesting characters we get a couple of obnoxious jackoffs who go to Mexico and find the puzzle box, kill a woman, and summon Pinhead. Then, most of the film is a bunch of other jackoffs watching the found footage from the first two morons.

I have watched a lot of crap for this blog, but this might be the worst movie I have ever seen. The sheer incompetence of everyone involved is stunning. This isn’t just a shit film—this film is so bad that its existence hurts the cinematic world as a whole. Everyone involved in this should be banned from ever damaging American cinematic culture again. Every day that this exists is an insult to Hellraiser, horror, and cinema as a whole. Fuck this movie. Fuck everyone involved in making this movie. As Clark Griswold would say: “Hallelujah (only one film left). Holy shit (this movie sucks). Where’s the Tylenol (my head hurts).” 0/10