Let’s take another spin on some Indian horror. 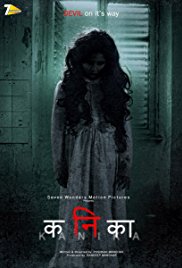 Followers of this blog will know that Indian horror just has not struck a nerve with me. While I can’t adequately judge an entire nation’s cinema on just a handful of films, it does seem this is one genre that doesn’t mesh well with the slick style of so many Indian films.

Kanika is a bit different from other Indian horror films, in that it doesn’t seem as silly as some of the others. The sets are nice, the actors are tolerable, and the camera work is overall strong—for the most part. The few Indian films I have seen have a truly unique style, and the camera becomes as much of a tool for interaction as it does for capturing scenes. In this film, we have several swooping moments that look cool, but kind of detract from the tension of scenes. They always remind me that I am watching a film.

We follow a renowned doctor Kaushik Pradhan (Sharad Ponkshe) who, despite his success, is clearly hiding a dark secret. The film is somewhat similar to The Ring (it is even compared to it often) in that there is some morbid tale that is linked to a haunting.

Kaushik begins to see the ghost of a young girl, and for me he acts way too nonchalantly about this until a bit later in the film. We then get to find out he has been hallucinating (or has he? Dun dun dun), and the whole “I don’t believe this person” crap trope appears here as well. It is painful to see someone say “You can trust me” and then laugh when ghosts are brought up. I mean, this is the type of thing I see relationships ending over, and all of these movies just shrug it off.

This is also probably the one millionth film I will complain about the music in, but here goes. The score of the film just doesn’t fit the tone. It is either to soft in otherwise dramatic scenes, or too hip in scenes meant for tension. The way everything is framed, I think it would have been better to have no music at all. I am probably in the minority with that opinion, but for me the whole thing was more distracting than anything else.

An aspect of this film that I do like is that most of the story is told to us through dialogue. Sometimes this gets a little heavy on the tell side, and not enough on the show, but the conversations actually allow us to get to know the characters a bit more. In a weird way, this movie would probably work better as a stage play.

All of Kaushik’s colleagues begin to see the ghost girl as well, and we are slowly introduced to the idea that they are all hiding something. It works as a mystery on some level, but it just kind of chugs along. There isn’t really any sense of urgency throughout the whole thing. The biggest problem with the film is that it just isn’t very scary. The frightening scenes are more cringe worthy and laughable than anything else. Sure, there is some tension, but no payoff.

The story has a lot of different realities occurring, and the film cuts away from these with no real rhyme or reason. The mystery elements would have worked better if played straight, as is it is just kind of annoying. The main actors don’t do terribly, but the side characters are absolutely terrible. I found myself annoyed with a lot of the scenes that are supposed to be making a social point because the acting was simply dreadful. These moments are so overly melodramatic that they actually belittle the point the film is trying to make. At worst it is poorly made and overwrought, at worst this is simply stupid. The tragic part is that the film speaks to a real issue and could have been handled much better.
Don’t get me wrong, I was at least interested as the story rolled, but once the twist is revealed there isn’t a whole lot left. Heck, I can barely talk about the plot without spoiling it. I don’t know about this one, on the one hand it is entertaining, but only at a base level. A lot of the latter intrigue is more frustrating than interesting as the characters don’t seem to know what to do or how to act—and I mean this in a lack of narrative direction more than a plot point. The film starts okay, but descends to crap from there. I wanted to give it a higher score, but I just can’t. (Also, fuck this film for blatantly plagiarizing Oculus). 2/10