Makes you wonder how they talked Jared Harris into doing this dumpster fire. 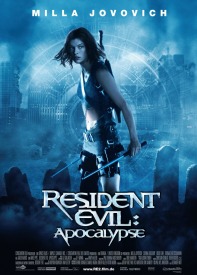 The second film in the franchise adds to my theory that the people who made it lightly read the back of the videogame cases and nothing more in preparation for this series.

Before I even begin the review, on thing that truly annoys me about this movie is that the dialogue has these weird pauses. I worked for… … … The Umbrella… … Corporation. It is almost like the actors were reading the lines off a cue card and had no time to practice. This happen frequently enough I do honestly wonder what went wrong with the script writing.

The film begins with a two-minute summation of the previous film, and really does cover just about all you need to know. I think this is possibly the best example of how shit that film was—they don’t even hide the fact of it being nothing more than a set-up for a crap franchise.

This time, the idiots at Umbrella have unleashed the infected onto the city, and we follow a group of survivors (Alice among them—after a while) as they try to bargain their way out by rescuing an Umbrella executive’s daughter. All the while a giant dog turd monster called Nemesis is hunting them. To be fair, Nemesis is a character in the videogame series, and the film is trying to throw a nod to the inspiration. Jill Valentine (Sienna Guillory) also makes an appearance, and the filmmakers truly embraced the over-sexualized outfits. This entire series is for twelve-year-old boys.

The sequel is closer to a traditional zombie film than the first, and this is a smart move on the part of the filmmakers. Granted, the acting and writing are still jilted and forced, and the uber-tough-talk nonsense still lingers, and Alice’s character is now an absurd superhuman for some reasons. I guess the movie still sucks no matter how generous I want to be.

At its core, this film could have been at least a fun zombie film, but the director just can’t help himself. No scene in this film can go more than about five seconds without a cut. It takes about five cuts to throw a punch, so the quality of the choreography is non-existent, which makes the whole superhero angle pretty lame. The fights between Nemesis and Alice are laughable, and they are meant to be the highlight of the entire film.

Not going to lie. I found myself so sickened by this narrative that I walked away from this review for about a week. The funny thing is, I remember little of the movie because there is nothing worth remembering. I do remember thinking about how uneven and bad the pacing was, how laughable the acting was, and wondering how hell they convinced Jared Harris into being in this pile of crap. I guess they thought adding in a more known actor would somehow help, but his role is little more than a quest-giver who serves little purpose to the film overall.

I think this is what happens when movies decide that it is more important to make a scene look cool and excite young boys than add any sort of artistic validity to the film. This whole film is little more than a compilation of cool stuff that you’d expect to see churned out by an amateur high school student. I’m willing to bet the dumb story I wrote in the eighth grade about zombies attacking my school has about the same writing quality as this (if only I knew what ever happened to that document).

I chastised the first film for feeling like a cash-grab by exploiting fans of the series, and kind of promising us that the sequel would not be as much of a shit show. Well, the same thing happens here. We end up with a film that is trying to work as an extended introduction to more characters who will inevitably show up in the sequel—yippee. We also now have a superhero character in Alice, who has psychic powers and superhuman strength and crap, which completely divorces this one from the games (yes, I know RE5 added some of this crap in, but overall this is quite the departure).

As I am rereading this review to remind myself of the plot, I notice that I am not being as funny as I normally try to be. My snark comes from irritation, and I am not irritated with this film: I’m just kind of sad. This is what Hollywood execs think gamers want, and they are deliberately appealing (and exploiting) the lowest common denominator, and we are stuck on the other end in a sort of “this is the best we’re going to get” mantra. I feel like horror fans went through this, but at least when that genre was only serving up garbage to the mainstream there was good stuff coming from overseas and independent circuits. For gamers, we are pretty much totally reliant on hoping some shitbag studio hires someone who isn’t in it just to tell their own story and make occasional masturbatory nods to the original content and stories—stories which they are gladly pissing on to make their own mark.

The whole scenario would be kind of funny if it wasn’t so pathetic. I can’t believe Capcom signed off on this crap, but then again, they’ll shovel out just about anything they think they can make a buck on. Aside from being ineffective as even a time-killer, this film series seems on track to actually damage the reputations of two creative industries. 1/10