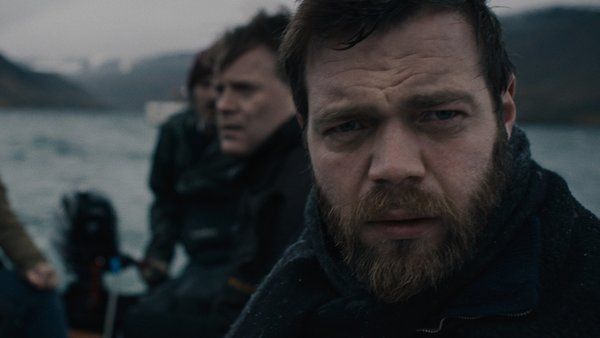 Let’s take a look at some Icelandic horror.

Of the Nordic horror I have seen, I think there are two categories: good gory flicks and good slow burning flicks. I Remember You is in the latter category. We have several moments with no dialogue or music, and watch the characters interact with the isolated world around them.

We have two separate plotlines that eventually connect. We follow psychiatrist Freyr as he investigates strange happenings in the town. Freyr is still reeling from the disappearance of his son, and now finds himself embroiled in a strange mystery following the suicide of a woman. Markings on the victim’s body suggest that this suicide is linked to something much darker.

The other story involves a young couple Katrin and Garoar, who have bought an abandoned building with their friend Lif (I am not putting the actors’ names because I can’t get the accents to translate onto the blog. However, all did great). Katrin finds an unmarked grave as they begin restoring the house, and supernatural events begin occurring.

The two plotlines connect, and I think the ties are a bit more obvious than some other critics have argued. While the acting is fantastic, we are stuck with actors moving through a relatively predictable plot. Sure, there are some turns here and there, but anyone familiar with horror or psychological mysteries will have a fairly good idea of what is coming. The ending does throw a bit of a curve, but it wasn’t surprising to me. I guess the best way to put it is that I did not predict it accurately, but was not surprised.

A potential problem with this type of storytelling is that most audiences will be more invested in one half than the other. I wanted to see more of Freyr, and this wasn’t due to not liking the other characters or anything, I just thought his half paced a bit better. We also get a lot more story out of Freyr’s half, and this makes some of the moments with the young couple seem like filler, but this is not always the case.

The film is sometimes tense, but never scary. I think it needed something to give it that extra push, but what would have worked I don’t know. Part of the reason the film is so compelling is due to how minimalist it is.

The technical aspects of the film truly lift the entire project. I will include the acting here—there isn’t a dud performance anywhere. We have wonderful scenery, dark and tense nights, and excellent sound.

If I had to gripe, which I do, I think the film goes right to the edge of something truly great, but then backs away. For how much meat there is on some of the plot points, particularly about loss and bullying, it really doesn’t take these concepts anywhere. I enjoyed the movie as I watched it, and I think this is one for many different film fans, but there is something that will leave you feeling a little incomplete. A good, but not great film (but this director is probably one to watch). 8/10.