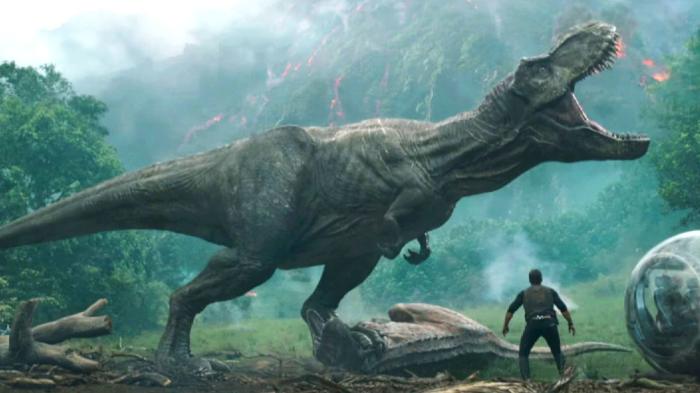 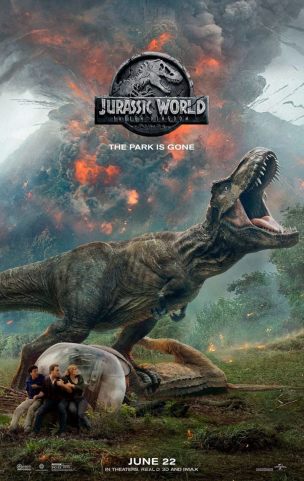 I am not going to be nice to this movie, so if you liked it, you might want to not read this.

Jurassic World: Fallen Kingdom is a stupid movie that should burn in hell where it belongs. We are given another ghastly story that pisses on the grave of the original film, and I am simply sick of it. I am also sick of people telling me that I should just turn my brain off for these movies—let’s parse that out—I need to pretend I am a fucking idiot to enjoy the film. I don’t think this idea is the endorsement folks seem to think it is.

I hated the first Jurassic World, and just about everything I hated about that one is catapulted into the sky here. We double down on terrible characters. Pratt and Howard have no chemistry, and their involvement in this film is so forced that it makes almost no sense. We don’t have the idiot kids, but instead we get Franklin (Justice Smith) and Zia (Danielle Pineda) to ruin things, but I am getting ahead of myself.

The park is closed (finally) because it seems that people have learned that dino parks aren’t a good idea. All of the animals are left on the island to do their own thing (and for some odd reason this includes the flying ones), but wait, there is now an active volcano threatening all of them—and they might go extinct again. Claire (Howard) is now a dino-rights activist, beause that makes sense, and is recruited by original park founder (or something) Benjamin Lockwood (James Cromwell) to go and rescue some dinos.

Claire has to recruit Owen (Pratt) who doesn’t want to, and this is where the movie first seemed a little weird to me. Shouldn’t it have been he who was the activist and her who was done with ridiculously stupid ideas? One of them was a CEO, the other trained fucking raptors—which one do you think would be the activist? The reason that it had to be Owen was that they decided to make Claire’s character so useless in the first one there could be no reason to bring her along unless she was spearheading it. (And they need her handprint for the security system—I am sure that can’t be replicated).

The movie piles stupid on stupid before we even get to the island. Our new heroes Franklin and Zia are potentially the most obnoxious characters in the Jurassic Park franchise, and I do not think I am exaggerating there. Franklin in particular is loud, obnoxious, and completely cringe-worthy. He disappears for a large chunk of the film inexplicably) and I think this was due to the filmmakers realizing how annoying his character was. Zia is a dino-vet who has never seen a dino—um, I am not sure, but I think that means she is not actually a vet. I mean, I suppose I am a brain surgeon who has never performed surgery, but trust me, I read about it.

Obvious villains are obvious, and the cheapness of the villains makes the whole film kind of lame. There is no surprise here, and to make the villains so transparent the writers forewent logic. If the people rescuing the dinos were doing so to sell them (this is the first half of the film), why didn’t they just keep Claire and Owen in the dark? Why turn the tables on them when they were potentially in a position to do something about it? The actual answer is: the writers did not know what they were doing. Instead of crafting anything close to a coherent or interesting story they were too busy pounding it to their own posturing about the importance of the environment. However, they fuck that one up to as the film can’t decide if dinosaurs deserve to be protected or are monsters we need to kill.

A particularly harrowing scene on the dock rings hollow as the entire episode is so contrived. Forced emotional appeal might get a reaction from the audience (it is sad), but the sheer stupidity of all the moving pieces doesn’t give it a lasting bite. Yes, volcanos are dangerous, but why focus on this one animal when thousands were killed moments before? Further, why have the cold-hearted mercenaries be among those watching—what do they care? I might be harping here, but this scene felt cheap and manipulative more than anything else.

We also have to have another stupid hybrid dinosaur—this time a T-Rex and a raptor (I forgot its name). The creature is trained to kill anything someone marks with a laser, attached to a rifle… Think about that one. Wouldn’t it just be easier to, I don’t know, shoot the target? Why would you pay $28,000,000 for a rifle that shoots a dinosaur? Granted, saying it like that is kind of awesome.

The imbalanced (and bloated) narrative moves through the stupid motions we all expect. The characters are cut cleanly between good and bad because any sort of nuance is apparently too confusing for us modern audiences. A genuinely stupid and shallow film that features some of the worst writing I have seen in a major blockbuster for a long time. I hate this movie.

Now, to turn it all around.

As we left the theater and I fought the need to vomit. (I almost walked out I was so disgusted with the story). I noticed that a lot of young (pre-teens) were singing the films praises. Maybe the film still has some magic for people not entrenched in the entire series. No, I don’t mean that younger people are inherently dumber, but maybe they weren’t expecting another legendary film. The film seems to deliver the most basic needs of the audience—and for people looking for a shallow adventure with plenty of CGI and family-friendly suspense, I suppose this one is worth seeing.

I think the film is lazy, but it also has enough features in it to hint toward a Jurassic Park Extended Universe—how one feels about that will likely vary. However, it seems like this sort of safe, episodic, and ultimately hollow narrative that places itself into a larger world is a trend that is not going to go away anytime soon. Maybe this is the best we will see of blockbusters, and I do find that troubling, but I seem to be in the minority. 2/10