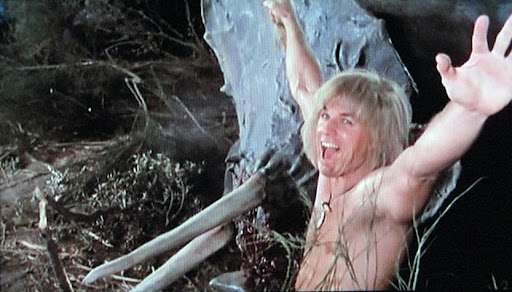 Yor, the Hunter from the Future (1983) Film Review 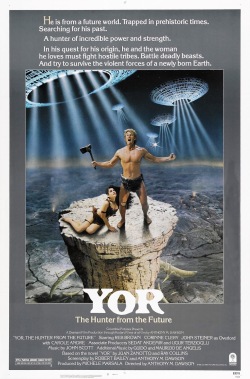 Yor, the Hunter from the Future is an Italian film about an idiot surfer barbarian bro kicking ass and getting all the women while finding out who he really is. If that summary doesn’t pique your interest, I am not sure what will. After the awful Snowman movie, I wanted to watch something that is so bad it is awesome. Friends, we have struck gold here.

We follow Yor (Reb Brown) who appears to be an idiot, but is totally jacked. Reb Brown might be one of the worst actors ever, and this is one of many things that make this film oddly and unintentionally one of the funniest movies I have seen in a while. Brown openly laughs during scenes, can’t stop smiling, seems to forget dialogue, looks at the camera, goes the wrong direction and has to turn around, and yet it is still somehow watchable. After Yor saves Kalaa (Corrine Clery) and Pag (Luciano Pigozzi) they are all immediately best friends. Kalaa is immediately in love with Yor (as are all women in the film) and she becomes violently jealous at any other encounter–like murderously jealous.

The film plays like an idiotic teenage male fantasy, but the fact that is tries to play it straight makes the whole thing almost surreal to watch. There is an obvious level of care in the costume design and sets, but they (inexplicably) chose to fill these sets with some of the worst actors, ever. No one is convincing, and I have never seen actors go one direction, stop, pivot, and run the right way before. Were they running out of film or something?

How is the story? What story? It is just Yor and co. moving from area to area (and picking up a new female love interest at each stop) and it all kind of links to a more science fiction story. Maybe? It claims that Yor is from the future in the title, but he doesn’t seem to be, instead he is of a different (and better) race. The racial discussions in this film should be considered problematic, but the whole thing is so stupid it can’t be taken seriously.

We also get the best CGI/G.I. Joe trapeze moves in history—or the worst, depending on your perspective. The film even has its own theme song! If you watch this, you will see a hilarious mess that somehow kind of works.

The film has major problems (obviously). Most of them are hilarious, some are more annoying. This is certainly not a good film, but it is absurdly entertaining. I highly suggest watching this one in a group. In the spirit of the madness of this movie, I score it 3 tacos out of a burrito.