Let’s take a look at a film about patriotism and loss. 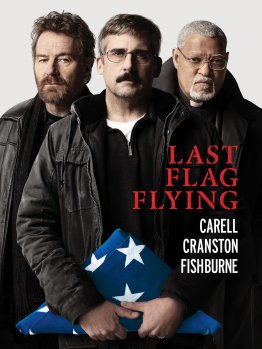 Last Flag Flying takes on the admirable task of making a war movie that isn’t inherently political. We follow Doc (Steve Carell) who reconnects with old Vietnam buddies Sal (Bryan Cranston), and Mueller (Laurence Fishburne). We discover that Doc is reconnecting with these men because his son died in Iraq, and he wants his friends with him when he goes to retrieve the body. What follows is a sometimes funny, often sad, and generally thought-provoking road trip where these men try to make sense of the world, war, and where they belong.

I tend to like Richard Linklater (the director), but I don’t necessarily love him. He is a talented storyteller, but often there is something missing from his narratives. Last Flag Flying might be his most stripped down and minimal narrative, and I think this is to his benefit. The dreary and closed setting force us to engage with the feelings of the characters, and this is where the film truly shines.

Each of the three leads brings something to the story. While their personalities are sometimes abrasive, they all seem real. Doc is the most subdued, and we see glimmers of personality in between moments of crushing grief and despair. Carell proves here that he is capable of a wide array of emotion, and I think he is becoming one of the few must-watch actors out there.

Bryan Cranston is great, but Sal is somewhat tiring. He is the humor in the film, but his humor comes from a deep and visible trauma. A little less of Sal (or more of the others) would have helped balance the film out a bit more. Fishburne is great as a reformed man rekindling his boyish tendencies, but he isn’t given enough time on screen. While there isn’t a dud performance, we do have an uneven presentation of character.

The story is simple, but effective. Issues of death, war, and what it means to be a patriot are always thought-provoking. The film tries to balance how one can reject war, understand sacrifice, appreciate bravery, and love the United States at the same time. Doc is angry at the government (who can blame him), but he still clearly loves his country. The patriotism here is meant to be unifying, not divisive, but it isn’t an easy patriotism. Our characters are referred to as “over the hill vets” and they are cast aside by society and their government, but the film isn’t necessarily anti-war—or at least not in the same way a lot of Hollywood films are. The film reminds me of the old line from Herodotus: “No one is fool enough to choose war instead of peace – in peace sons bury fathers, but in war fathers bury sons.” The relationship between war and these men is complicated, and this film deliberately keeps the issue murky. I liked this aspect, but imagine this will be something that irks some viewers.

The technical aspects are competent. Linklater is skilled at not being intrusive into the story with excessive cuts, colors, or other tricks. It is easy to be absorbed into the story, and the fact that we don’t notice the strings behind the camera speaks to the expertise present here.

I enjoyed the film—thoroughly, but there are certain aspects that are rather irksome. First, we have to have a snooty colonel who is presented as a villain, and even sends a marine with the men in order to… not sure actually. The sort of diabolical scheming (at least that is how it is presented) doesn’t really fit, and doesn’t help the film. I dreaded some stupid twist for most of the film thanks to this scene, and while it doesn’t pan out the way it threatens, this was still unneeded. The film could easily have had the marine accompany them without the need for this tone shift. “Hey, these guys are old, and at least one of them is clearly an alcoholic—go ahead and make sure your friend is brought home safely” was all the film needed. It is amazing how much this singular scene messes the tone up, but it should have been cut.

Perhaps more problematic is the relationship between the three men. Sal doesn’t recognize Doc at first, and this doesn’t seem right. For Sal and Mueller to drop everything and go with Doc one would think there would be a stronger connection. Granted, the brotherhood of soldiers should not be understated, but this doesn’t seem realistic. Further, we learn of contentious issues within their relationship with each other, and we then have to wonder why Doc would even want to reconnect with these people. The lack of an obvious connection makes the buy-in tough. Sure, watching the three disparate personalities bounce off one another is fun, but it doesn’t make a lot of sense. Mueller’s multiple threats to leave seem to be the most rational reaction to everything that is happening.

Linklater is good at making large personalities, but Sal often crosses the line into caricature rather than character. Sure, it is fun watching him discover a cell phone, but to see him flirt with a woman half his age at his friend’s son’s funeral isn’t as fun. With how much reverence his character has for the corps, I doubt he would behave in such a way at a funeral. Now, I might be wrong, and it could be argued, but we simply don’t know enough about his inner workings other than he is an ass to make a clear call.

The film has a lot of small flaws, and once we start picking at them more are exposed. It is a good, but flawed movie in the end. I think it is worth watching, and is certainly well-made, but it begins to unravel a little with analysis. A solid American drama.