Let’s take a look at some recent horror. 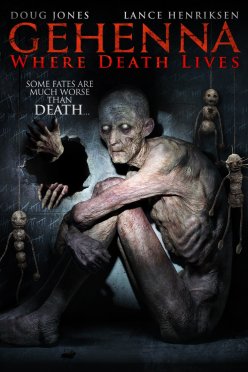 When a film gives you three separate introductions (not including a lengthy opening credits scene) you might want to be a bit worried. Starting a horror film with an evil ritual isn’t uncommon, but the lack of context means these images are basically pointless. Some old white dude is chained to an altar and sacrificed—don’t know who this dude is and I don’t care. His existence is only to set up something later on. I think this is a lazy sort of storytelling.

I was surprised to see Lance Henriksen make an appearance in this one. We also have Doug Jones here, so there is some talent on the screen. Too bad both of these guys are only in the film for a couple minutes (note who gets top billing on that photo). A cheap trick.

We follow Paulina, who is visiting Saipan to scout a location for a new resort. Of course, her and her team stumble into an old bunker and weird shit starts to happen. I would call this sort of film the found-horror, where our characters are doing something seemingly benign and then stumble upon something sinister. Don’t get me wrong, this type of horror can be great (Texas Chainsaw Massacre), so there isn’t a problem in the basic premise.

Where the film struggles is odd editing choices. The camera bounces around between cuts more than is needed, and this creates some humorous moments. When one member is going to look for another he steps off camera, but when the camera cuts you can still see him standing two feet away. Sure, he is now looking into the distance, but come on.

The film also wants to tug on our sleeves a little too much. Stock characters spout out that the real estate area they are looking at has a dark history, and was a sacred burial ground. Let’s not even bother with the cliché issue here: it is more frustrating that they have to tell the audience why this particular area is dangerous/haunted. Couldn’t just have some ruins, or religious symbols in the distance—nope—have to hold our hand through the whole thing.

Unfortunately, this sort of guiding story-telling isn’t limited to the set-up, but also infects the characters. The snobby member of the group who only speaks “dollars and cents” also instructed the vehicle rental agency to save money, so they get a shit van. Really!? You can be as miserly as you want, it is highly likely you will also want a working vehicle for your job. (It is odd how this character seems to be paying out of pocket as well—as it also seems they are part of a corporation). I might be harping on this a little too much, but every scene just breaks the film. It is impossible to be sucked in when you constantly have characters stopping to make sure we are all on the same page.

I actually do not think audiences are stupid. However, I do think that production companies think audiences are really stupid. The amount of exposition that goes into these films is simply mind-numbing. Seriously, watch a preview of the film. Know what is going to happen? Go watch a preview for any mainstream or semi-mainstream horror film and you are going to be spoon fed the exposition with a couple of cheap jump scares. When the story and situation have to be so manufactured there is no room for anything that interesting to happen. Part of what I loved about the Endless (which is far superior to this film) is that it is hard to determine what the hell is going on. We are left in ignorance with our characters, and must watch them puzzle things out without stopping and reminding us of where we are and what we are doing.

I think we should also consider why we have to make our group of survivors jackasses in these movies. We can debate the ethics behind putting resorts in U.S. territories all we want, but do we also really think that everyone who works for these companies (to be fair, almost everyone) is just a bloodsucking corporate sycophant? I think the film is trying to be cautionary about our desire to industrialize or commoditize nature, but they do a pretty piss-poor job of making these arguments. There is more evidence this film is trying to argue that people in hospitality development are mostly dicks than anything dealing with culture of the environment. Let’s also make our group have some casual racism because why not.

Anyway, our heroes get trapped in an old bunker that they investigate for reasons, and that is when the meat of the story can actually begin. Something happens when they become trapped, and now there are other people in the bunker, and something strange is occurring.

I guess I should put up a spoiler warning here.

Somehow, the bunker warps time and space. It is like a portal to hell, but has some Western Pacific religious symbolism mixed in. I don’t know enough about the religions of that region to say whether or not the film presents this religion accurately. However, I would guess they layered it with more superstitious flair than it perhaps truly has.

The film never really gets interesting. We keep up with our stopping and explaining things, and the whole thing sludges towards a predictable (and pointless) end. Don’t waste your time.