Let’s watch the film that might have broken my brain. 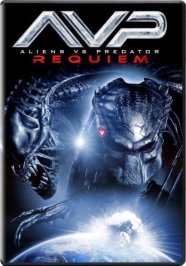 The ill-conceived sequel to the already messy Alien Vs. Predator wants the audience to debate whether we should all just eat our own hands.

Starting off right after the first one, we get a glimpse of the new Predator-Alien or Predlien (my term, patent-pending), but wait! There is new feature of this film. It’s called turning the lights so fucking far down you can’t tell what the hell is going on. The recap scenes from the first film are distinctly darker, and this sets the tone for the whole film. I think they wanted us to fall asleep and wake up thinking we saw a good movie.

Anyway, a ship full a predators collectively shits the bed on containing the threat and crashing on earth. A bunch of facefuckers (let’s just be honest about what they are) run off and began infecting people. We get an immediate killing of a hunter and his kid. Oh, don’t you see how edgy this film is? They give you about a half-second scene of a kid in danger. You now know this one isn’t going to pull any punches. They are going to kill kids. That is so original, I have never heard of a desperate film going after children, babies, or animals (this one gets two for three) as a sophomoric and cheap attempt at feeling edgy.

We also get to hear people say fuck this time, and they do so a lot in the first fifteen minutes just to establish that this is indeed an R-rated film. “Cool.” We all say with our popcorn in hand. Maybe this time we will actually get a decent film. You might even trick yourself into thinking the lengthy storylines with humans will go somewhere. Certainly, this is just preparing us for the non-stop action later. Surely, this film can’t actually be asking us to take a bunch of obviously 20+ year olds as high-school students seriously. Surely, certainly, surely, they can’t.

The entire scenario is so profoundly stupid it is almost hard to fathom. The film is more like a sort of experiment to see if we as the audience can will ourselves to spontaneously combust. We get about five separate storylines dealing with human drama, so cool let’s all juggle that bullshit.

You’d think the predators would send a death-squad to stomp out this issue. Nope, one dude. Granted, this one seems to not be a complete idiot like the others, but seriously? One!? Instead of reviving either franchise, this film drowns them both in shallow water and sets their corpses on fire.

The film is only about 90-minutes long, but you will feel every second of it. While the film doesn’t try to show off how cool it is by killing pregnant women, you will get to experience the joys of immature and stupid teen drama. A smarter film might have tried to make some comment about the nature of human predation, but such a concept is so far above this film there isn’t even the shadow of an idea in what we see.

We do get to see the death of a career here. That guy from Rescue Me (Steven Pasquale) probably regrets this film at just about every moment of his life. (Granted he has had success on television). The crappy part about this is that the film isn’t his fault. I’m not even sure it is entirely the director’s fault. While the writing is below B-film standard, we can almost see the production company forcing this film to attempt to be as widely appealing as possible. Be sure to have teens, criminals, cops, military, parents, and everyone else representing by one dimensional characters so everyone has something to link to. Unfortunately, they forgot to bother making these characters likable at all.

The people in the first Predator are dicks, but there is still a certain amount of charm in the bravado. The film is a ridiculous buffed out version of what we imagine special forces are/do. Here, I don’t know what they were trying to do. What should have been a safe bet ended up crushing a lot of careers, and I am surprised it didn’t kill both franchises.

Perhaps we will one day live in a world were people bother to take the time to find out what made a film enjoyable or interesting, but I doubt it. Fuck this movie.