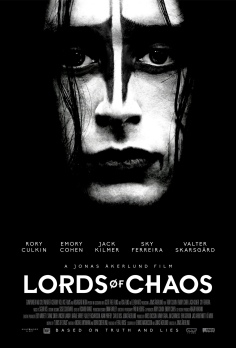 Lords of Chaos is an adaptation of the sensationalized history of Norwegian black metal. Adapting a film about music and following the founder of the genre (Euronymous) seems like an odd choice to me. Puritans of the genre will squeal at any inaccuracy (despite the actual true events being largely unknown). I had figured the film would be a pile of crap because biopics often are. Also, I not a huge fan of director Akerlund, but I owe him an apology on this one.

The film can be broken into two broad chunks: the Dead era and the Varg era. Mayhem, the band often attributed to be the first “True Norwegian Black Metal” band has a compelling history. I assume most folks are familiar with the story (at least those who will watch the film), but anyway, spoilers may be present here.

Euronymous wanted to make evil music, and what emerges is a new type of metal that relies heavily on aesthetic nihilism. This draws Dead (Jack Kilmer) to the group, and let’s just say that Dead is a mess. He huffs bags with dead animals, hates cats, buries his clothes, and is almost cartoonishly suicidal. The spectacle of Dead mixes well in the band, and they begin to gain traction and attention. One person who takes notice is Varg (Emory Cohen) who seems to want to be a part of the group.

Things kind of crash when Dead commits suicide (which no one should be surprised at). Euronymous opens a record-store and continues to craft the black metal scene. Discussions of burning churches, murder, and general mayhem (pardon the pun) abound. Varg finally gets into the Black Circle (an inner group for only the truest of members). This is the part of the film where the Varg era truly begins.

Varg takes the nihilistic philosophies seriously but warps them to a sort of nationalist ideology as well. Further, he mixes imagery of paganism and Nazism into his aesthetic. Varg also begins burning churches, which changes the scene from wayward youth to actual criminals.

On a musical note: there is nothing more extreme than what these black metal musicians did, so it shouldn’t be a surprise the genre took off. Varg likely helped solidify the genre in history in a lot of ways.

The rivalry between Varg and Euronymous grows, and the goal seems to be to find out who can out evil the other. One church burning isn’t enough nor is one murder. We get to hear Euronymous’ thoughts as he realizes things are spinning out of his control and that his creations now have minds of their own.

The film is interesting, and this is largely due to the story itself being so unique. Instead of a biopic, we get more of a crime drama. I enjoyed the film quite a bit, but of course, nothing is perfect.

We are meant to side with Euronymous here, and this makes a large assumption about the state of black metal and how it should be perceived. Whether the satanic imagery and calls for violence are to be taken as a joke or for real isn’t as clear cut as this film makes it, which is odd as this film shows how some people did take it seriously. Euronymous is our redemptive hero and Varg is our devilish villain, but the reality is probably more complex.

The film would have done well to note the influence of Varg and his one-man band Burzum in creating National Socialist Black Metal, which has the black metal sounds with Nazi philosophy. The existence and prevalence of this sub-genre (of a sub-genre) is something that most metalheads (myself included) have had to contend with at some point or another. By presenting Varg as more of a one-off character the film shoves a lot of the problems with the genre under the table.

I know that previous sentence probably sounds weird given the, you know, murders and arson and shit in this film. It is odd that we find some anti-establishment crime less terrible than others, but I’m going to leave that discussion for another time.

I imagine the self-reflective criticisms of this film aren’t going to sit well with a lot of metalheads. The cheesy aesthetic, elitist mentality, and constant reminders that these were all kids might break the spell we imagine these groups under. I personally don’t think it is going to do any harm to have to consider our own oddities in musical choice, and discussions of image versus philosophy are likewise interesting.

The film does well to point a finger to expose an inconsistency of stupid idea, but it does not spend much time showing why metal is important to so many people. The lack of redemption for the music (or even the fans) plays increasingly oddly as we realize we are meant to root for Euronymous in his professional and personal battle with Varg.

There is more to gripe about (I haven’t even mentioned the what I think is wholly made up love story), but the film does more right than wrong. If nothing else it is a fun film to check out.