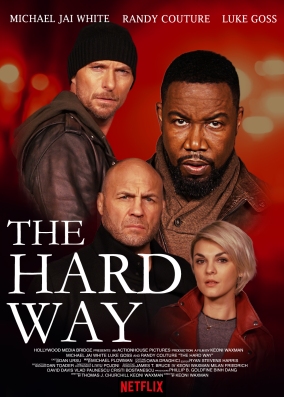 The Hard Way is a new action film starting Michael Jai White, so I figured I would give it a chance.

We just have another goddamn John Wick clone—and not in a good way.

We follow Payne (White) who travels to Romania after his brother is killed during an operation against a shadowy drug lord. Being ex-special forces, he begins to work on the investigation and teams up with his brother’s partner for some action!

The plot is bordering on absurdly simple, but we come to action films for some good ol’ shootouts, right?  I love The Raid, but you could write the entire plot on a napkin—but that movie had great action. Here, we suffer from a lot of issues and this includes bad action.

The biggest problem here is the editing. Every scene (not just the action ones) end up with about forty cuts, unneeded slow motion, odd shiny filters, and sometimes black and white cinematography. None of it makes sense, and we get to see the opening chase about fifteen times (I think they thought we’d forget), but to fair, you kind of need to see it so many times to have any idea who is what and where is where. We have some talented martial artists, so it makes no sense for them to have skimped on the choreography so much.

A lot of the film feels rushed. Sound editing is weird, voices are sometimes mumbled, and the scenes barely connect to each other. I get that we need to give White plenty of people to punch in the face, but I think we could do so without having to result to some of the most obnoxious stereotypes in cinema. Every character in this movie has basically been fed through a cliché machine.

The most surprising thing is how boring the movie is. The action sequences are too uninspired and too infrequent to keep things moving. The initial jolt of adrenaline you’ll get doesn’t last to the halfway point, and the resolution is laughable.

What is weird about the movie is how competent a lot of the elements are. The framing, story, and so forth are mostly okay (albeit incredibly derivative). The movie is not good, but it also isn’t a complete travesty (sans editing). It seems like they knew they were making a baseline movie and just went with it. In a way, this actually makes the movie seem worse than it is. It is so forgettable and so cliched that you’ll forget about it a day after watching it.

Even action fanatics will have a hard time stomaching this one. There are dozens of better options. Skip this one.