Errementari: The Blacksmith and the Devil (2018) Film Review 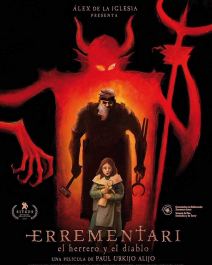 Errementari is streaming on Netflix and I have wanted to watch it for a while. The visual style of the trailers caught my interest and (thankfully) the actual film maintains a high level of quality.

The film is a take on Basque folklore and examines a Faustian type situation. We follow Patxi (Kandido Uranga) a man who is identified as so evil and ruthless that the devil fears him. We see him murder several men after they fail to execute him after he is captured. After his escape we cut a fear years later.

Our focus changes to a young girl named Usue (Uma Bracaglia) who is tormented by other children because her mother killed herself and is damned to hell. Religious guilt, hypocrisy, and greed are quite forward in this film and corruption is a major theme. The blacksmith has become a legend and the townsfolk are terrified of him (yet seem to ignore their own tyrannical behaviors).

A government official arrives wanting to investigate Patxi and is looking for missing gold. The townsfolk agree to help, and Usue sneaks in to find the blacksmith is hiding something dangerous.

The best parts of this film are the visuals. The set designs are excellent, but the character designs, wardrobes, and makeup effects are simply breathtaking. We have incarnations of demons and they don’t appear cheesy or stupid. Errementari has set a new bar for demonic designs.

The story is interesting, predictable, and enjoyable. Usually a film that is so predictable becomes a bit of a slog, but here is somehow works. I think the folktale structure of it keeps things moving well and the predictions are leading towards a profound point. There is a slight imbalance between the realism of the sets and some of the more grandiose moments later in the narrative. Even with accepting a magical realism we have a transition to more of mythic legend that is a little abrupt. I am not sure how this could be telegraphed better for the audience, but it doesn’t hurt the film too much.

I liked the movie and I think fans of dark folktales will like it also. It is weird though, while I do think it is a good movie, I don’t see myself rewatching it anytime soon. In some ways it is one and done—despite fantastic acting and design. Give this one a go.