Let’s do some robbery. 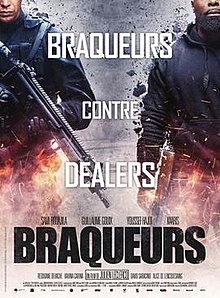 The Crew is a French crime drama that drips atmosphere. We follow Yanis (Sami Bouajila) a hardened robber who seems to leave nothing to chance (saying he plans 30 robberies for every one he commits) as he pulls off a major heist. His younger brother Amine (Redouane Behache) screws up by selling one of the guns used in the heist. Another gang is busted with the gun, and now they want Yanis to pay them back. Will he dare take on this risky job to pay his debts?

This is a lean film—coming in at under 90 minutes, but it feels decently developed. We get an idea about all the characters and what they are motivated for. However, another 30 minutes or so would have allowed us to truly know everything. In a way, this is a really short version of Heat. While that comparison is mainly due to the nature of heist films (something Heat perfected) it is also due to the tone of the films. This is a more mature action film where there seems to be more at stake.

I miss heist films that were serious. For me, I would take this slower burn than explosive and over-the-top action. When the bullets are flying here there is simply more weight to them. If you want an action flick I would suggest looking elsewhere. The Crew is more of an adult drama than anything else. We get an inner look at the criminal mind.

The newcomer to the crew Eric (Guillaume Gouix) adds an interesting wrinkle to his scenes as he seems to want to quit, but also wants the money. Yanis simply enjoys the rush. Each character is distinct—albeit familiar.

I think part of the problem with this genre is that we don’t have a ton of room for reinvention. While this one does have some cool ideas with the heist—and how to move a busted car—the overarching beats are the same. We have a film that looks nice (though a little grayed out), acted well, written cleanly, and paces itself in a tense way.

I have found myself appreciating films that simply do everything well instead of trying to reinvent the wheel. This is a familiar story, but it is well told. Maybe we will get a crime thriller that turns everything on its head, but until that comes, we should seek out films like The Crew that not only maintain a solid beat, but also respect the audience. Our hands aren’t held in this film, and there is no forced moralizing or messaging. We have a story about criminals doing criminal shit and things get hairy.

This is a film that knew what it wanted to do and succeeds in that goal. Check it out on Netflix.