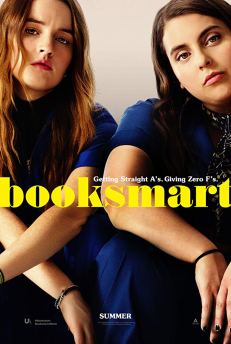 Booksmart is the directorial debut of Olivia Wilde and the newest darling of everyone I know. We get a somewhat fresh take on the coming-of-age/party/female buddy comedy film. Two booksmart (get it) students decide it is time to actually experience a real party the night before graduation. Amy (Kaitlyn Dever) and Molly (Beanie Feldstein) are our two leads, and we follow them from one ordeal to the next as they try to find out where the party is.

However, before we get to the party, we have to have a cringey sequence where we get to know all of the high school caricatures we will see again this evening. I hated this part. Honestly, I was trying to spontaneously combust. I must have gone to school in a different universe as none of these films capture any of my memories. While I know someone is going to say I should lighten up towards this film, I felt the same way about Lady Bird (I film I did not like at all)—yet, everyone else seems to have a connection to these scenes. I suppose this is for all of the people who feel odd not getting the appeal—you’re not alone.

Booksmart gets better once we get out of the exposition and into the plot. Amy and Molly are both likable and several scenes are quite funny. (Everything involving the panda was hilariously awful). As our duo moves throughout the city, they begin to learn more about their colleagues and grow as people. Isn’t that so sweet?

I liked the movie—really. However, as I have discussed it since seeing it, I always say, “I liked it, but…” and this should indicate there are some problems with the narrative. This high school does not exist—and I wish it did. Sure, everyone is a caricature, but we then learn that everyone is a real nice person deep down and we should all be more accepting. While this is a fine lesson, it also denies reality. There is simply no room for any sort of darkness here.

Maybe I am simply too jaded for these movies (I do appreciate this possibility). We breeze through different classes, ethnicities, orientations, and personalities with kid’s gloves here. The character Gigi, who is always pleading for attention (by endangering herself) and seems to be in an endless drug-induced stupor is never discussed—despite her obviously working through some sort of trauma. There is no room for things to get too real here—nope, we better have everyone shake hands and applaud for being great people.

The cruelty of high school and the daily tragedy we subject youth to is simply not present here. Even Amy, who has supportive parents of her lesbian identity despite their religiosity, seems to be from a different planet. I imagine many watching this film from a perspective similar to Amy’s wish for such a healthy household.

Now, perhaps this is the point of the film. If we all stopped being terrible to each other then maybe young adults would, too. This is a fine argument, but it also smacks of a sort of naivety that is hard to ignore.

The biggest problem with this film is what the viewer is going to put onto it. If Wilde had made something to reflect reality it would have been a different film. Here we have a buddy movie that is more often funny than it isn’t—and is more often good than bad. Overall, this shows that Wilde may be a director to keep an eye on. Worth a watch.