Let’s float for the first time. 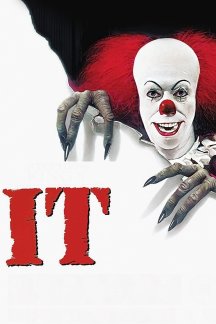 People remember this movie fondly because as in the story we tend to forget things. Folks who said this was on par or better than the first chunk of the remake might need to go a doctor (or just rewatch this version).

I hear a lot of folks defending this one as “good for what they had,” which I suppose is true, but they had crap. A low budget and hardline violence censors render this film pretty tame. Even Pennywise (Tim Curry) isn’t able to do much other than growl and dance around.

We follow the losers club as teens and adults as they battle the evil clown that feeds on fear (and children). They must work quickly to save the town before Pennywise kills more people. Forgive me for a lackluster plot recap. I’ve just done it too many times recently.

Stiff acting and some of the worst comedic timing make this entry in the It universe feel like the dated mess that it is. I know this one introduced a lot of folks to King and to Curry, but let’s not lie to ourselves that this is a rushed ABC produced diet-version of the story.

The horror elements are particularly weak. I remember my sister and I pestering my mom to let us watch this shortly after it aired and after several weeks of annoyance we were allowed. Even as a child the scares didn’t work. We sat around the TV in disbelief at how corny everything was.

The most amusing part is how they put absolutely no effort into finding adult actors who looked even slightly like their younger counterparts. Instead, we have stupid traits that transfer from kids to adults like ear pulling, a mole, cupping your own face, and not being funny.

To be fair, this film actually makes it seem like the adults care about each other. For how bloated It: Chapter II is you’d think we’d have the losers club rebonding at least a little. The adults seem to care for each other here in their own stilted and awkward way.

While the overall structure works a little bit better in some areas, the decision to jump around in the timeline (as the book did) removes all tension from the scenes. We also get oddly loud personalities from everyone. Richie isn’t funny in this version—just loud. Ben is also oddly yelly in most of his scenes.

In my opinion, we still don’t have a strong adaptation of the It. The first half of the new one is excellent, but the second half is potentially one of the worst films of the year. The 1990 version has some cheesy charm, but let’s be honest: this movie is terrible. Watch it to make fun of it. If you remember it being great or scary or touching—awesome—don’t ever watch it again though.