Let’s see the roof of the world. 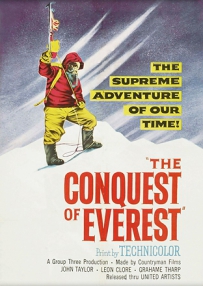 I have always been interested in Mount Everest, and this film details the first successful expedition in 1953. We also get a brief history of the numerous failed attempts to reach the summit.

The best part of this is the chance to see the mountain before it became buried in garbage and has become an amusement park ride of people who simply have enough money to pay for skilled people to guide them. During these early expeditions there was still wonder and awe in what the mountain was and what summiting it would mean.

The worst part of the documentary is probably the needless music in the background that rarely fits the tone of the film. Let’s watch people freezing while listening to an upbeat melody!

We don’t get recreations, which is awesome. The photos and footage are real. Aside from some animated maps that show pathing what you see is all real. I loved this aspect of the film and it is cool to see actual history.

Old documentaries like this are highly educational. I consider myself a bit obsessed with Everest and I learned quite a bit here. However, I do wonder if someone not as familiar with the history of the mountain, early expeditions, and the basic geography of the mountain would get as much out of this. These old documentaries would work in perfect concert with a lesson plan or discussion group about the mountain.

It is hard to recommend this one. Do you want to learn more about the first successful summit? Then this is a well-made and thorough examination of that expedition. If you’re not interested in Everest, I don’t imagine this one would hold your interest. A bit more information on the scientific findings and how the mountain effects the bodies of the climbers might make this appeal to a wider audience.

Not sure how else to sell this one. I enjoyed it. Never hurts to learn something once in a while, right?