Let’s go to the woods and be stupid. 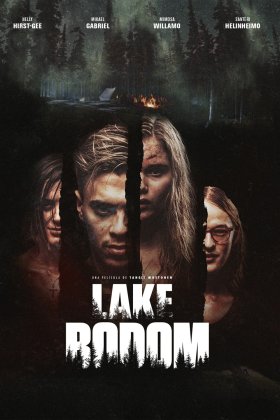 Lake Bodom is a Shudder exclusive that boasts a 100% on RT, which made me think I was going to have a treat. Instead, I got a double portion of boredom with a side of disappointment. Given how much praise is being lumped onto this film I thought I would be heading to a spooky expedition in the woods, instead the forest is made of dehydrated dog turds and everything smells like morning mouth.

Sure, that was repetitive, but I thought it was funny.

Anyway, Lake Bodom takes places decades after a real murder occurred in the area (this information is somewhat relevant). We follow four people who seem to have absolutely nothing in common. I’d link to the actors, but I can’t even distinguish the character names and IMDB doesn’t have photos for ¾ of the cast.

Maybe I’m just a jerk, but I can’t imagine a world where these four people would be friends. I’m just going to categorize them by gender. We have guy who they decided to make look like a tough guy who hangs out with creepy nerdy dude who is obsessed with serial killers. What possible connection these two have isn’t clear. Our gals are one who is more outgoing and one who is reserved (due to nude photos being posted of her online). The traumatic event is her only character trait.

The guys want the gals to come to a cabin at Lake Bodom with them and for reasons entirely unknown they agree. Once they arrive, it turns out creepy dude was lying and there is no cabin. I actually said aloud “why the fuck would you stay?” No one really seems fussed about this fib and they end up sitting around the fire not having any fun.

A lot of folks have praised the film for how good it looks. Yeah, nature is pretty, and the film takes advantage of this. A high-quality camera and a nice setting don’t make a good movie.

Lake Bodom is another one of those movies that builds itself around a twist and sacrifices the narrative to make it work. It ends up the girls plan to kill the boys in an effort to get payback for the photos (that actually don’t exist). The rationale is a little thin.

While the twist is surprising it also makes no sense. Let’s premeditate murder in an area we don’t know and go with people who are falsely claiming other people are coming. It should take the police about four minutes to solve this crime (and the first three are grabbing a cup of coffee).

The twist is stupid. This movie is stupid. In the end, it is just a bunch of vapid characters who are as forgettable as they are shallow in a movie that wants so hard to be unpredictable it just becomes illogical. We have a horrific waste of time here.