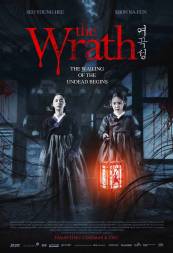 The Wrath is a shudder original from Korea that follows the haunting of a young pregnant woman. The woman (sorry I don’t have names—the IMDB page doesn’t even list them) is forced into surrogacy by a nobleman trying to slay a demon that is haunting his family. He rapes her (though the film seems to refuse to engage with this reality) and is killed by the demon. Now that she is pregnant, she is held hostage by the noble family.

The film is basically a domestic haunting with odes to Evil Dead and, oddly, Cinderella. Part of the problem with this film is that the nobles are so objectively unlikable and our protagonist so mute that we can’t really grab onto anything. The evil sisters and mother in law don’t add anything, aren’t interesting, and just drag the film out. At a lean 90 minutes I figured I was more than halfway, but it had only been 30 minutes.

The plot jumps us in with no context. We get a no-name kill at the beginning, as we oft do in horror, but know nothing about the person being attacked. We then get to know the idiot nobleman who is about a sleazy as they can come. We know there is a curse, but not why, or how. The information isn’t parsed out well enough. Instead of being mysterious, I found it to be boring.

The film looks fine. The costuming and sets are lovely. However, the sound editing is so over the top that I wasn’t sure if they were going for comedy or horror in several of the violent moments. It was like they filled a bag with mayonnaise for the squish effects and wanted to get their money out of it. Aside from the gore, everything is so damn loud that none of the moments are pleasant to sit through. (We have a modern-day air siren blaring in one scene for… reasons?)

I didn’t care about any of the characters—ever. This reminds me a lot of Netflix originals that might look nice but invariably have some aspect missing to make them enjoyable. I am bummed here because Korea has been killing it with horror lately, and this one just feels a little rushed. It is odd to have such a short film from the region, particularly with it seeming to want to emphasize the characters.

An absolute waste of time.