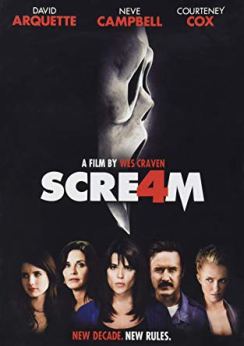 Scream 4 is the inevitable reboot of the series (can’t wait for them to give this one another go) that follows Sidney as she returns to her hometown to promote her new book. But wait, there’s more: two teens are brutally killed, and her arrival seems to foreshadow disaster striking the town.

It is weird to review this movie as there is nothing new to talk about. New killings with the same idiots (if an idiot was killed in a previous film a replacement moron has been provided by the studio). The meta elements have been reduced to having characters care about horror films. This is just a simple rehash.

However, the film does hilariously showcase how inept the previous sequels were. You could watch Scream and then jump to Scream 4 and miss nothing. The character development has been so piss poor for this series that this works more as an actual sequel than anything else.

Once I noticed that nothing of consequence has occurred in these films, I felt disappointed more than irritated. How in the world did they manage to crap out two films where nothing of value occurs? The tragic part is that this series started as a clever reflection of the genre, but now embodies the absolute worst aspects of it.

Oddly, I think this is the only other Scream film worth watching. The stupid scope-creep of other films is gone, and we simply have a slasher here. All the expected genre limitations remain. Our killers are ruthless until the character is too important to simply kill. (Seriously, Sidney is trapped and struck with the hilt of the knife instead of the blade). We end up with a stripped-down film that works mostly on the baseline needs for the genre.

The most annoying aspect of the series remains: the only way the killers can get away with anything is by making the rest of the characters alarmingly stupid. If anyone interested in making a film happens upon this review, please recognize that your villains or struggles are only as interesting as what they are up against. I feel like I tell my students this same idea in argumentation all the time. If the cops are idiots who can be ambushed by a teenager, then they were never a threat. If an ICU unit has to be unstaffed and empty for a scene to work, it doesn’t.

Critically analyzing the shortcomings of this film might help people to make better films. I certainly hope so, as it would be nice if something of value came out of the needless franchise.

I suppose that should be the final point. Just stop making sequels.