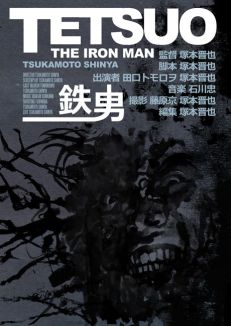 Tetsuo: Iron Man is a surrealistic-cyberpunk-horror mesh from Shin’ya Tsukamato and has a hell of a reputation. This one is an underground favorite and is often considered one of the most important moments in Japanese cinema (as this film finally got them some international notice).

Here we have another movie that is good, but almost inaccessibly strange. While themes worthy of analysis are present, the plot itself is rather thin. A working man runs over a metal-fetishist and now the metal-fetishist has cursed the working man. We slowly watch our hero turn into the Iron Man as metal grows out of his skin. Throughout the process, hallucinations (or not?) plague the man as he loses control. Shocking violence and bizarre sexual situations abound.

I know a lot of folks have dumped analysis into this movie; stating it is a commentary on technology, industrialization, and isolation. It might be, but I think this might also be a case of an artist presenting themes and watching everyone else apply meaning to it. I don’t mean this as a knock to the film or the critics, but I do wonder if reading too deeply into this allows one to be played a little.

Where this film deserves truckloads of praise is the almost entirely unique style. We have a mesh of Cronenberg and extreme body horror with a bit of chaos thrown into the mix. The editing is madness—and the nightmare speed cuts give the entire experience an alien feel. At times it almost feels like we are watching an animation rather than live action, which adds to the creep factor.

Shot in high contrast black and white we get a strange sense of displacement as we watch. Despite the mass industrialized themes, something about the filming seems almost timeless—as though the people are simply stuck. There is an inevitability in this film that is hard to describe.

The film is a unique experience, but it is also absurd in many ways. We have characters with drills for dicks in a film that is hailed as a cinematic masterpiece, which indicates this one likely has a love-hate relationship. Many will simply be turned off by the psychosexual situations and the erratic editing may be a little much for some viewers.

However, those who do stick with it will see something that will likely stay with them for a long time after the credits roll. Whether you find it hypnotic or annoying will depend on you. I wish I could give this one a full-throated recommendation, but this one is certainly more of a niche film.

Right now, this is streaming on Shudder, so give it a go if the plot sounds intriguing.