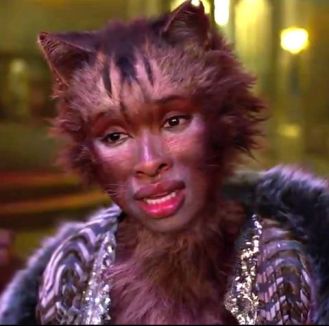 Jason Derulo (who stars as one of the freakish monsters) has said that critics are wrong about this one because Cats defies art. I wonder if he’ll blast audiences for awarding this pile of garbage a 2.7/10. I also wonder if Derulo realizes this means he can only have opinions on music and acting without being a hypocrite. Anytime we have stars spouting contrived adulation about their work I just want to puke.

When your stars are walking out of a movie or attacking critics you know that something went wrong. And in Cats just about everything is horribly wrong.

Tom Hooper, who has been churning out lukewarm film adaptations of musicals for years, directed this shit show. In my opinion, everything wrong with this film needs to be directed solely at Hooper.

I should note here that we saw the patched version of the film. Don’t worry, I’m sure it made no difference.

Why the Cats musical became so popular doesn’t make a lot of sense. The whole thing is just a bunch of character introductions linked together by a stupid plot. Look, the whole thing is just stupid fucking gibberish and any attempts to read more into it are more an exercise for the viewer’s creativity than the play/film’s message. I saw the play, hated it, and now have seen the movie, and hated it, too. The story is just stupid. We follow a new stray Victoria as she meets a bunch of self-centered cats who want to have a chance to be reborn. That’s it. That’s the whole fucking plot.

You can google reactions from folks to get an idea of how the cats look. I can’t say it better than others, but I can say they look fucking atrocious. Well, they actually look like what the actually are: actors in oddly fitting cat-shaped leotards with spots where CGI should have covered stuff up but doesn’t. They should have embraced the play’s idea and just done practical makeup, but that isn’t how we do things anymore.

Hooper owns the film. I know that might seem a little odd when production companies have so much power, but Hooper is the one who made the artistic decisions, overworked the editing team, didn’t let them finish, and then released the film without final quality checks. Even if others interfered and share responsibility, Hooper could have (and should have) fought publicly to prevent this sort of disaster from being released. I imagine anyone involved with the effects team is going to omit this one from their resumes.

The need to rush this one out in time for Oscar consideration (you may take a moment to laugh now) caused most of the problems. The editing fails at every level, but let’s start with the actual most important element of a musical: sound. The sound mixing is terrible here. When Jennifer Hudson hits her high note, they drown her out with the music. The swells overtake the singers, the back-up singers overtake the lead, and the leads are muddied at best. I could barely understand a word of Rebel Wilson’s song. Fucking up the music in a musical is simply astonishing. If everything else goes wrong, this needs to be spot on and it isn’t. It sounded like garbage in the theater (I was embarrassed watching Ian McKellen mutter through his piece) and will only be worse for home viewing.

Okay, so they humped the bunk on the music, but are the dance moves good? Well, no. Don’t get me wrong, Hooper tricked a lot of talented people into this, but the washed over green screen makes the dance moves look fake, even when I’m sure they aren’t. Granted, when the camera sits still long enough to let us watch the dancing, they are fine, but it jumps around so damn much it becomes obnoxious to pay attention to particular moves.

I wanted to mention the more physical failures before getting to the visuals because the visuals are so bad, I think a lot of people aren’t noticing the other problems.

Before we get to the freakish monsters’ appearance, let’s talk about their size. How big are these cats? They range from human size, to normal cat size, to mice size, to kind of giant, and all of this happens in every sequence. The whole thing is just so damn jarring that it constantly reminds you this is a film, and a bad one at that. Once again, it all points to the editing team not having enough time to fix the transitions and ratios.

And here’s where we’ll talk about the best (worst part): the freakish nightmares that are the cats. I’m not sure anyone involved has ever actually seen a cat… They look more like a furry convention than a musical group.

The best part about them is that the CGI is unfinished, so expect a lot of human hands, feet, and faces jumping out at you throughout. Going for full animation would have been wiser. This whole thing is a complete joke—absolute amateur bullshit at best. It is a pathetic tragedy that this film was ever released in this state. Taking the time to unfuck it might have made it a niche success, but now it will go down as one of the most disastrous productions ever.

I thought about editing my Worst of 2019 to include Cats, and in a lot of ways this is the worst entry, but the terribleness of this film removes it from cinema. I have a hard time calling this a film in any way. I know a lot of folks are now wanting to see how bad it is, just watch a number on YouTube, don’t reward this with even pity money.

I do feel for the effects team who will be blamed instead of greedy producers and an inept, impotent, or incompetent director.

Instead of seeing this piece of shit, go to an animal shelter and volunteer to give them a hand for a couple of hours. Watching real cats play is infinitely more entertaining and you’ll be helping your community.