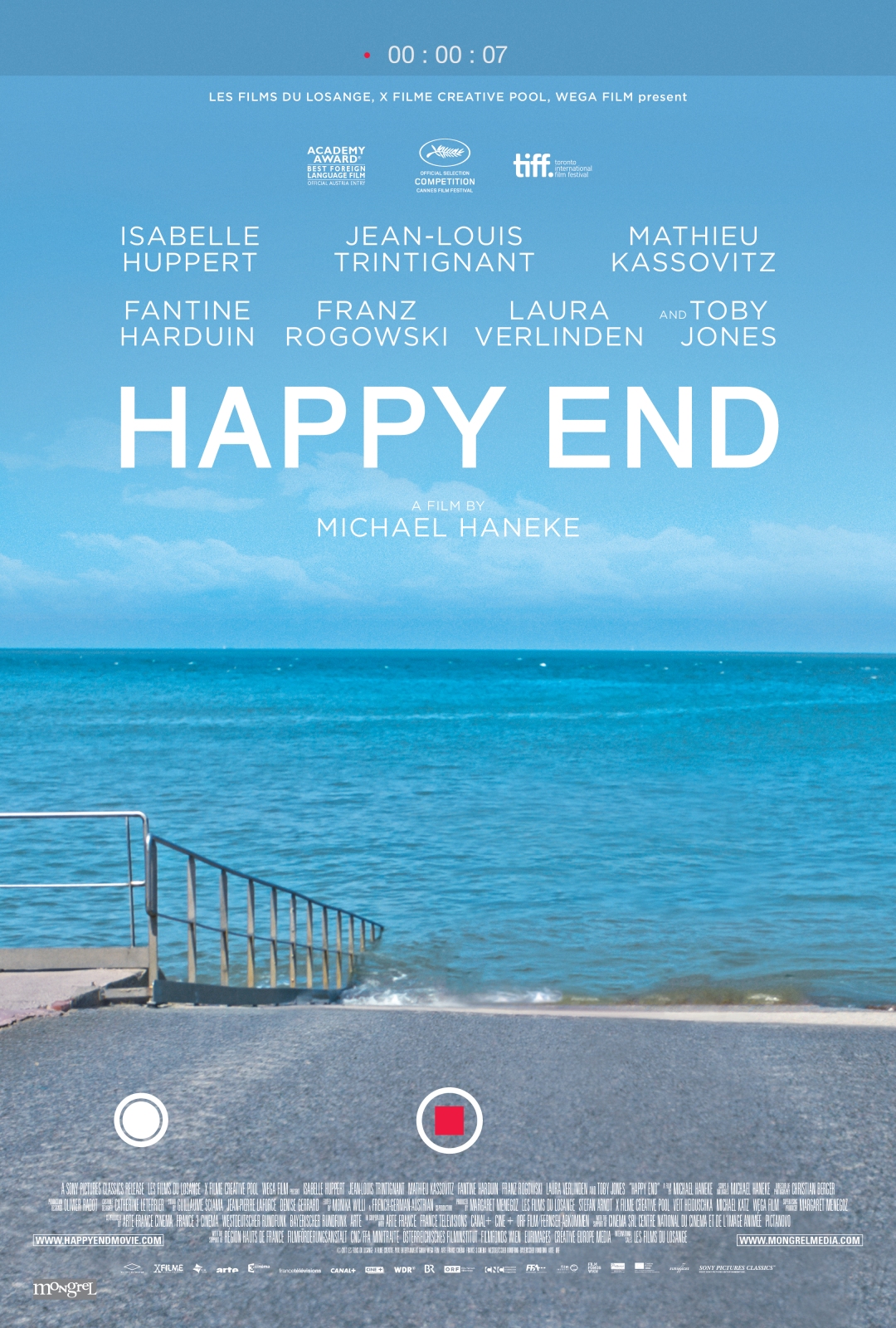 Let’s end it all.

Happy End is the most recent film from one of my favorite directors: Michael Haneke. Here, we have a similar theme of investigating social malaise and the inner workings of people through a harsh lens. In some ways this is a culmination of many of Haneke’s works.

We follow a wealthy French family as they deal with numerous fallouts. The patriarch Georges (Jean-Louis Trintignant) is aging and recognizes his own mind leaving him. His eldest daughter Anne (Isabelle Huppert) is struggling to salvage the family business after an accident claims the life of a worker and is trying to save her alcoholic son from himself. Thomas (Mathieu Kassovitz) is cheating on his second wife while forced to take care of the child Eve (Fantine Harduin) from his first marriage after Eve poisons her mother.

I haven’t even listed everything that is tumultuous in this story. We also have the backdrop of worker and refugee status in France and the corrupt inner workings of the wealthy. Through all of this, Haneke constructs a delicate dance where these issues meld together in concert to show the ugliness within humanity.

As usual, no one is safe from the critical gaze. While Anne seems to be the most well-adjusted of the family, she is also willing to leverage anything she can to protect her interests, including corrupt and shady practices with the help of her lawyer. The racial prejudices, bracketed by class and economic power, are understated, but ever-present. The workers for the Laurent family are consistently reminded of their lesser position, with Pierre (Franz Rogowski) even referring to one of them as the family slave.

Where I think Haneke goes above most directors is his willingness to force us to confront uncomfortable questions without providing easy answers. Nothing the Laurents do is inherently illegal (at least that we can confirm). Corrupt? Yes. Negligent? Probably. However, their corruption dances within the line of what we have come to expect from those with power. Lines are perhaps crossed, but over time and exposure our awareness of these ethical lines has blurred so much that it is barely noticeable. A wealthy individual working with a banker (while in a relationship) to ensure the most beneficial outcomes is something we expect, and to a large degree, accept. A wealthy business perhaps skirting safety regulations is something we are aghast at when it occurs, but once a settlement is reached (how much is a life worth?) our handwringing ebbs to numbness and indifference.

The voice of the exploited is drowned out by those in power. We rarely get to hear from those beneath the family. In a chilling scene, the family of the deceased worker is given the terms of what can and will now happen without even a word of acknowledgement or rebuttal. Who is given privilege to speak here echoes the real world as those without representation simply cannot be heard.

Even when forced intrusion of wealthy (and white) spaces occur the hubbub it causes drowns out the message. The subtleties present here make it to where one could miss the racial elements of the film if they aren’t paying attention. Haneke demands we look, and look closely, at the webs he constructs. Even if we don’t like what we see it is hard to deny the realism present within these scenes.

I found this to a fantastic and thoughtful film. It probably isn’t my favorite work of his, but it is still leagues better than most other films. I think this could be a perfect entry point into Haneke for someone interested in getting into arthouse drama.